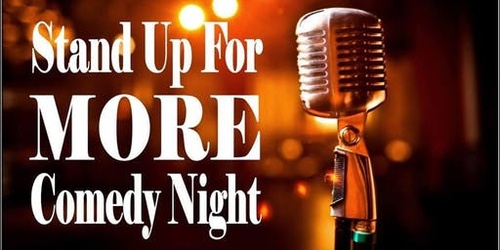 We are happy to announce, Stand Up For MORE Comedy is re-scheduled!

"Finally" back by popular demand! The 5th Annual Stand Up For MORE will be held on Friday, July 23rd at the El Dorado County Fairgrounds. We are so excited to be able to showcase terrifically talented top-notch acts benefiting MORE and the El Dorado County Chamber of Commerce!

The Producer and MC of this Comedy Night is Scott Edwards. Scott is the man who brought comedy to Northern California in 1980, owned Laughs Unlimited for over 20 years, and worked with the best – Jay Leno, Dana Carvey, Jerry Seinfeld, and many more.

Headlining for this evening will be Don Friesen, his kids think he’s fun. His wife thinks he’s an idiot. Audiences think he’s hilarious!

Don is a modern suburban dad just trying to raise his kids and get through the day with a bit of money in the bank and a scrap of dignity intact. With a unique style that can best be described as frenetic and engaging, Don captures the irony of parenting, marriage and everyday absurdities through characters, voices, parodies and some of the best written routines around.

We are excited to also feature the hilarious Mo Betterman with a special appearance by El Dorado County's own, Uncle Ben, known as “Bentoni."

In addition to the wonderful entertainment, the night will also include a delicious catered meal, adult beverages (one free drink included), a raffle and live auction. Come join the fun on July 23rd! Doors open at 5:30, dinner will be served at 6:15 with showtime soon thereafter. There  are only a limited number of tickets ... and they do sell out, so advanced purchase is required. Buy yours below or at MORE: 399 Placerville Drive, or online at: Buy Tickets Now

Can’t Find What You’re Looking For? Try a Search!